Local festivals tend to be associated with a specific location (temple or pagoda), and many originated in the Cham culture. A number of the festivals are connected to whale worship, and many are tied to Budhism or find their roots in ancient Hindu (Cham) beliefs or local legend.

Foreign holidays are gaining popularity, including Valentine”s Day, and the Januray 1st New Year. The Muslim Cham celebrate Ramadan (written Ramawan). Christmas is the second largest holiday celebrated in Phan Thiet (after Tet), with lots of lights, decorations, nativities and elaborate pagents. The week of Christmas leading up to the week of Tet (more than a month) is a fun time in Phan Thiet, with cafes and restaurants open late, lots of holidays treats, and people out late with friends. Birthdays are typically celebrated in cafes with friends. It is Vietnamese tradition for the one celebrating the birthday to pay all expenses and arrange the party themselves. 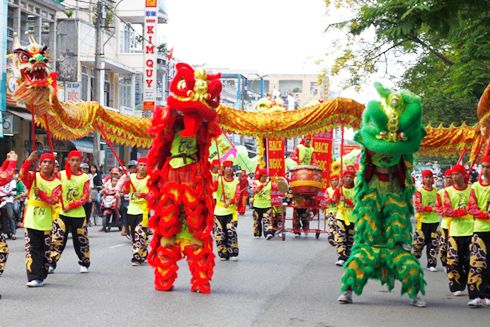 In Western Countries like the USA, the "holiday season" is over after January 1. Not so in Vietnam. Here the holiday season is extended for another month or more as families prepare for Tet, the lunar new year. Contrary to popular misunderstanding, Tet is not a single-day affair. Traditionally an entire month-long festival is celebrated from the 15th day of the twelfth month to the 15th day of the first month, but the first 3 days of the new year are the most important. The first day of the new year falls on January 29 this year. 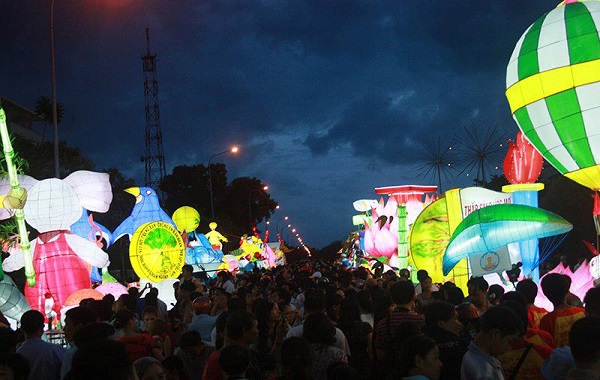 15th day of the 8th month (lunar calendar)
The Mid Autumn Festival (Trung Thu) is also known as the Moon Festival, and is a popular Chinese celebration dating back over 3,000 years to China”s Zhou Dynasty. The Festival falls on the 15th day of the 8th lunar month of the Chinese calendar. The traditional food of this festival is the moon cake, of which there are many different varieties. Cakes usually have at least one dried, salted egg yolk and come with fillings of coconut, yellow or green bean, lotus seed or minced pork. All are sweet.

The Mid-Autumn Festival is one of the most important holidays in the Chinese calendar. Farmers celebrate the end of the summer harvesting season on this date. Brightly lit lanterns are often carried around by children.

The Vietnamese version of this holiday is said to have originated in the 8th century, during the reign of Emperor Minh-Hoang. Legend says that the Emperor took his Empress, Duong Quy Pho, to a lake where he read a poem that he had composed to her by the light of the moon.

A more popular version of the holiday recounts the legend of Thang Cuoi, whose banyan tree was uprooted after his wife accidentally urinated on it and took him with it to the moon. Every year, on the mid-autumn festival, children light lanterns to show Cuoi the way to get back to Earth.

Binh Thuan Province was nationally recognized and awarded for its extravagant celebration of the Mid-Autumn Festival at the 2006 Vietnam Guide Awards. 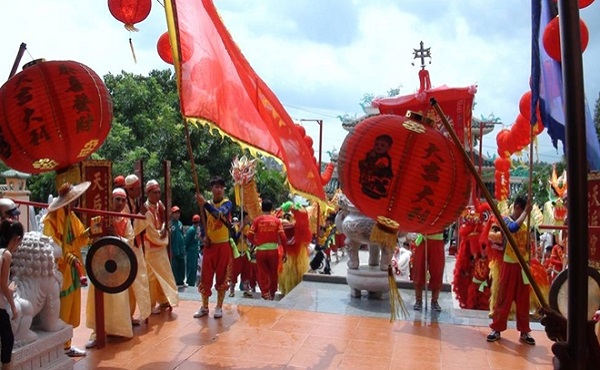 The Kylin chases a golden ball at the end of the parade.

16 / 8 to 18 / 8 Lunar month (August, September or October)
“Nghinh Ong” is devoted to whale worship and is celebrated at the Ong pagoda by thousands of Chinese and Vietnamese participants in Phan Thiet. People gather to pray for happiness, health and good fortune for family and friends. Ong Pagoda was built to worship Quan Kong and was built in November 1770 (Year of the Tiger), in Duc Nghia Precinct, Phan Thiet City. It has a beautiful, Chinese architecture. A statue of Quan Kong and an old bell cast in Guang Tung (China) are preserved here. On festival days, the pagoda is decorated with flower garlands. Colorful lanterns are hung during the night. There are some cultural activities such as "hat boi" (classical dramas performances) and "hat ba trao" (singing traditional local folk songs). The festival continues with elaborate parades, costumes and an enormous dragon dance. 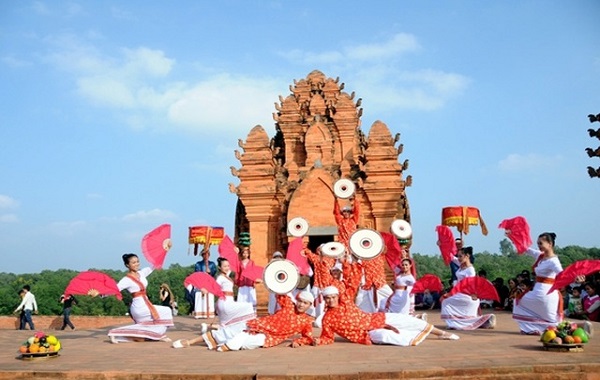 Cham Elders at the Kate Festival

Date: 8th and 9th lunar month
This festival holiday is an adaptation of the last day of Muslim Ramadan (called Ramawan by the Cham) The festival begins in the towers and mausoleums, and then moves to homes. Locally, it typically begins at the Cham Towers overlooking Phan Thiet. This Cham festival is an occasion to celebrate heroes and spirits (Po Nagar), kings of merit (Kings Po Klong Garai and Po Ro Me), and their people. On this holiday, the Raglai people travel to the Highlands and celebrate together with the Cham people. During the Festival, there are offerings made to the genii, and hats and costumes are placed on statues. At the end of the ceremony, people recite poems, play music, and participate in other games and forms of entertainment. 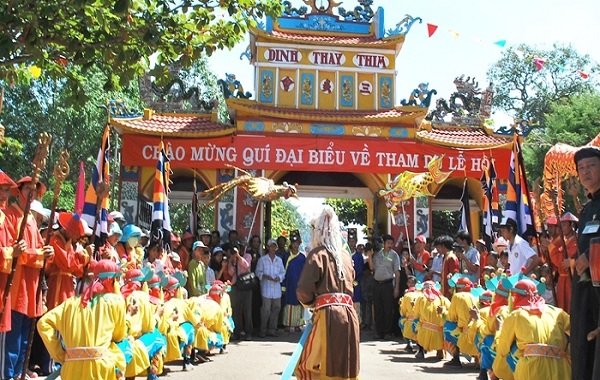 Every year on the 15th and 16th days of 9th month of the Vietnamese lunar year, at the Magician”s Temple (Thay Thim) in La Gi, Ham Tan, there is a big Festival on the death anniversary of a Magician and his Wife. The Legend says that in the 19th century, a married couple from Quang Nam Province came here and cured the diseases of the local inhabitants with magic. After their death, the local people built a temple to worship them. During the Festival, many local people go to the temple to praying, receive tatoos, consult oracles, have their horoscopes told, and attend banquets. The festival is held in Tan Hai Commune, La Gi County. 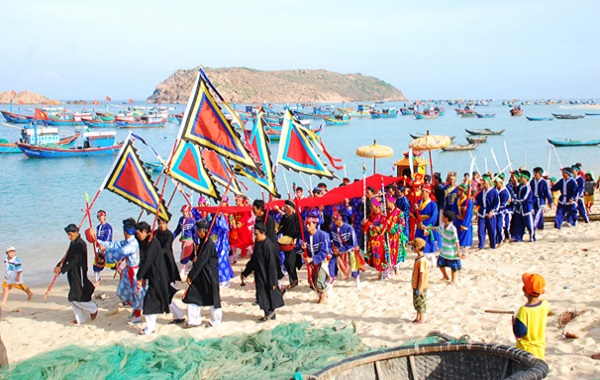 The Cau Ngu Festival is a fisherman”s festival for whale worship, and alternates years with the Nghinh Ong Festival. It includes a parade, dragon boat races, traditional games, and a variety of performances of Ba Trao Opera, the most notable performance being around the clock at the Van Thuy Tu Whale Temple.

The Dua Linh or Ba Trao Opera is originally a Cham art form associated with whale worship. The ritual begins on the riverbank with boatmen singing while rowing; praying to the Whale for peace, favorable winds, asafe voyage, and a good catch for the season.

Once yearly, at sunset during the Kate Festival, the Cham People celebrate the Peace Prayer ceremony; saying goodbye to the bad luck of the previous year, and pray for good things to come in the new year. After the ceremony there are a variety of games and traditions. Ceremonies such as Prayer for Rain, Rija Nuga, Damp Building Festival, and the Abstinence Ceremony are also held yearly by the Cham. 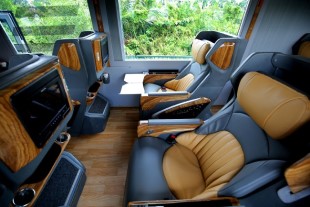